Replacing The Best of All Time

Back in February, when every player in the MLB was reporting to spring training, the Yanks had a few big decisions ahead of themselves. The obvious one was what to do with their surplus of starting pitching. Of course, Kuroda and Sabathia were easy choices going in, but we all sat on the edge of our seats, trying to figure out which SPs were going to be in the rotation. I remember multiple times when I googled "Yankees News", trying to figure out who that unlucky man was who would be sitting in the bullpen, the man that would end up praying that he would get a chance to pitch. But that eventually resolved itself, and kept Girardi from making what looked to be a huge decision. Girardi's troubles had finally passed...or so he thought. No one could have guessed the decision that he would have to make later during the season.

Mariano Rivera has always been the rock that has never moved for the Yankees. He has been the closer since 1997, and has been available in the 'pen almost every game since then. Whenever Yankees fans heard the song "Enter Sandman", they knew the game was over. Mo was unstoppable, he would just put every batter to sleep.

But then this year the unthinkable happened. Mo sprinted back to the wall in deep center at Kauffman Stadium with a fly ball in his sights. He approached the warning track, gracefully running for the ball as he was Curtis Granderson making one of his typical running catches. But the outcome was different that any Granderson play. The ball went over his head, and Mo was on the ground writhing in pain.

So we all now know what happened, and if you didn't someone may think you were on the show "Survivor", spending his or her days eating bugs and sleeping in huts on the sand. As great as a the prize of 1 million dollars is, I, along with many other baseball lovers, couldn't bare to spend my time apart from the game of America. When Mariano went down, tearing his ACL during batting practice, some may have thought it was the end of a beautiful era. An era of seeing the most dominant closer in baseball set records like it was his job (well actually, it was his job). Mo eventually decided to come back, the best news a Yankees fan could hear and news that probably made Red Sox fans almost cry. But that was the least of Girardi's worries at the moment, the real problem was replacing the relief pitching god. 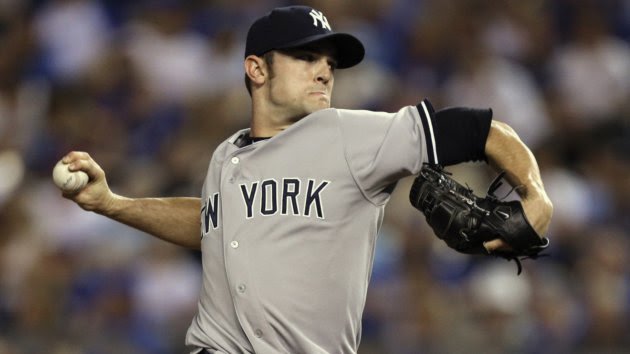 First it was Robertson, but his job as the closer was short lived. Robertson pitched two games as the CP, notching a save in the first one and blowing a 1-0 lead in the second one, before going on the DL for a strained oblique. The next in line was Soriano, and he has been very impressive. He already has four saves since Robertson went down, and boasts a 2.20 ERA. With Robertson coming back in early to mid June, a question is raised in the Yankees organization. Who will be the closer for the rest of the year.

My vote is for Soriano. He was a closer, if none of you remember, for the Rays only two years ago. As a matter of fact, he led the league in saves with 45 that year, and he is pitching like that again. Robertson is a great option to close games, don't get me wrong. He has nasty stuff, and is at times unhittable. But I believe he is almost like Tyler Clippard: too good to be removed from the SU role. Now that may sound stupid, as a closer is more important the a setup man, but both options for closer are very good for the Yanks. I like Robertson as a SU man better, and I like how Soriano has had experience finishing games. The Yanks really can't go wrong either way, but all the signs right now are pointing to Soriano, and I feel he is a better candidate for the job. We'll have to wait and see if Joe agrees.
Posted by Andrew S. at 9:08 AM